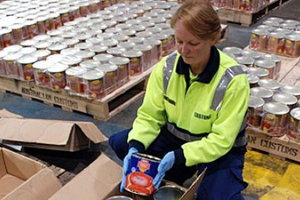 The War on Drugs has been waged for quite sometime now, but there seems to be no end to the illicit drug trade in sight. Not when drug lords dominate entire countries that produce most of the drugs in the world, or when demand remains frustratingly overwhelming. And even though authorities have scored really huge drug busts worth billions over the years, they've hardly made a dent on the drug trade in general. Here are 10 of the biggest drug busts.

A joint U.S. Coast Guard, Customs Service and Drug Enforcement Agency operation a Panamanian freighter en route to Texas that yielded 9,500 pounds, or nearly five tons, of cocaine in 1999. According to the DEA, the cocaine was worth $186 million.

Australian police and customs officials announced in 2008 that they have seized what is claimed to be the biggest haul—4.4 tons—of Ecstasy or MDMA pills in history. The drugs—hidden in 3,000 cans of tomatoes—were actually discovered in 2007, but the find worth £197 million, or $288 million, was kept secret, and was instead used as a means to track down and arrest the people behind the shipment.

Some £200 million or nearly $293 million worth of hashish were found in trenches and bunkers in Kandahar, Afghanistan in 2008. The drug cache, which reportedly was meant for use by the Taliban to fuel their war against the West, is so huge it is estimated to have weighed roughly the same as 30 double-decker buses.

Colombian authorities claimed in May 2005 that they have confiscated 13.8 tons of cocaine worth $US350 million which were concealed near a jungle riverbank in southern Colombia.

In March 2007, the U.S. Coast Guard seized 40,000 pounds of cocaine worth at least $500 million from three ships in what is regarded as teh biggest maritime bust in U.S. history.

Some 21 tons of cocaine which purportedly belonged to Mexican drug lord Rafael Muñoz Talavera of the Juárez cartel were seized from a Los Angeles warehouse in 1989.

The Colombian Navy made headlines in 2007 when it announced the seizure of 27 tons of cocaine, the biggest in the nation's history. Buried in 919 packages of 55 pounds each near the coastal town of Pizarro, the drugs are estimated to have a wholesale value of more than $500 million.

8. Tranquilandia in the Jungle - 14 Tons of Sr. Pablo Escobar's Stash

A tip from the DEA prompted the Colombian government to raid "Tranquilandia", a laboratory built in the jungles of Colombia by Medellín Cartel boss Pablo Escobar for large-scale cocaine production. The 1984 operation yielded 14 tons of cocaine, a haul with a street value of more than $1 billion.

9. Either that or the World Eats Plain Bagels for a Year - 17.5 Tons of Poppy Seeds

An anti drug operation in Afghanistan led by a British cop resulted in the seizure last year of 17.5 tons of poppy seeds from opium plants, which would have grown 30 tons of heroin worth £900 million or $1.3 billion.

In what is regarded as the biggest heroin bust —and most valuable drug bust—ever, San Francisco, California authorities seized 1,080 pounds of heroin. Not much in size compared to those tons of cocaine busts, but drug war officials pegged the total street value of the cache at $2.7 billion to $4 billion. With an average dose of heroin being around 300mg that's enough for every citizen of San Francisco to do heroin twice... all 808,000 people. Not Good.