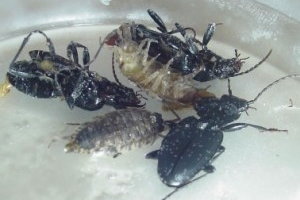 As drug trafficking laws in many countries get tougher than ever, drug dealers are finding more and more creative ways of smuggling their illicit merchandise past authorities. Unfortunately for them, they almost always get caught, however ingenious or even outrageous their efforts at concealment may be. On a sobering note, more and more drugs still do make it through, and that fact makes you wonder about the level of creativity those smugglers might have employed to successfully get their illicit merchandise past the most stringent of security measures.

A total of 300 grams of cocaine were found stuffed inside 100 dead beetles, discovered by customs officials in Amsterdam inside a package from Peru.

In Germany, a young mother was arrested for trying to smuggle 15 grams of amphetamines and 46 ecstasy pills into a local prison, stashing the drugs inside her daughter’s diaper.

U.S. Customs and Border Protection (CBP) officials arrested 50-year-old Warren Maynard of Brooklyn, NY, for trying to smuggle 42 bottles of liquid ketamine into the United States from Canada. Maynard tried to pass the drugs off as “holy water”.

Stashing drugs inside religious statues is an old trick. Making religious statues out of drugs, however, is not. A statue of Jesus Christ made from plaster mixed with cocaine was intercepted by U.S. customs officials at the border crossing in Laredo, Texas in 2008. The woman who was carrying the 6.6 pound statue managed to escape back to Mexico, but a 61-year-old Mexican man suspected of paying the said woman to carry the statue was arrested.

Drugs smuggling has gone to the dogs, literally. The DEA arrested in 2006 members of a Colombian drug organization for smuggling heroin into the U.S. through various means, including cutting open purebred puppies and placing heroin packets inside them.

A 66-year-old Chilean man was arrested by airport authorities in Barcelona, Spain after they discovered that the cast on his fractured left leg was made out of cocaine. Police also said the man may have intentionally fractured his left leg to make the use of the cocaine cast real. Now that’s dedication to one’s work.

In 2006, Austin, Texas cops found 168 grams of cocaine inside a drug suspect’s can of Pringles. But the really creative part here is that the cocaine was made to look like actual Pringles crisps.

Nope, we’re not talking about drugs hidden in suitcases. In the case of a woman trying to fly from Chile to Spain, the suitcases were the drugs. Chilean airport police intercepted the woman carrying two suitcases which was later found out to be made of cocaine. According to one of the officers, cocaine was combined with resin and glass fiber to make the suitcases, which aroused suspicion because they were heavier than their contents.