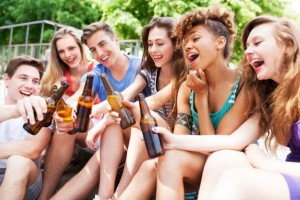 Take a forgettable college party. Add a reckless drinking game and you've got a notoriously wild party. The rules are not complicated. The most important objective is a quick buzz. But these games usually involve participants blacking out, vomiting and even dying. Here are 5 such games to avoid if you are mindful of your health.

These drinking games involve binge drinking at its highest level. Many youth give in to peer pressure. They want to fit into their set. Reports say bullying may also be used. These 5 drinking games are very dangerous but many young adults find them hard to resist.

The fans of this practice believe they can achieve a quicker high if they pour vodka directly onto the eyeballs. In this painful procedure, the strong liquor burns and scars the cornea - the eye's natural protective barrier. In so-doing, it leaves the eye open to infection and possible blindness.

The idea behind this game is for everyone to consume 60 shots in 60 minutes or worse still, 100 shots in 100 minutes. This fast-paced drinking results in the blood alcohol level becoming dangerously high, but it also makes for a faster buzz. Participants are left extremely drunk, sometimes long before the drinking time is up. Many end up face-down in their vomit.

This game normally happens at twenty-first birthday celebrations. Drinking to excess appears to be on the list of freedoms granted on that day. Cheered on by onlookers, the birthday person puts away 21 shots of strong liquor, one after the other. Tragically, there've been cases of people dying of alcohol poisoning on the very day of their twenty-first birthdays.

A bottle with 40 ounces of the highly intoxicating malt liquor is duct-taped to either hand of the participants and they compete to see who will finish first. They may not do anything else during this time including going to the bathroom and using their cell-phones. The quickest way to restore their freedoms is to drink up. And as though the amount of alcohol in their bodies were not dangerous enough, they may be required to break their empty bottles as a sign of their achievement. So their hands, with the pieces of broken glass attached, become a danger to themselves and others.

Believed to have begun in Australia and now spreading like wildfire, it starts with one person video-taping him or herself drinking lots of alcohol, posting the video on Facebook and YouTube, and then challenging someone else to do worse within the next 24 hours. More and more challenges are issued in this way with the drink cocktail becoming stronger and stronger, and the manner of taking it more and more wild. The cocktail has been known to include dog food and even raw egg. Available videos have shown people resorting to back flips, hand stands and other risky behavior once drunk. At least 5 people have been known to have died from this dangerous game.

These are just a few of the many dangerous drinking games out there. They may appear like harmless fun especially to teens and college students, but they cause serious damage to the body either right away or in the long-term. It may also lead to serious alcohol addiction.