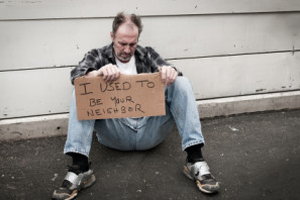 This was probably the statement I heard the most in the beginning of my drug using days. In fact, before I had even delved into using substances, I had heard this comment about drug addiction regularly. Unfortunately, I ended up proving this stereotypical comment to be true, but that certainly doesn't have to be the case for everyone.

Not all drug addicts look like drug addicts, though sometimes you can tell someone is using drugs. In my experience, most of the stereotypes about addicts are extremely flawed. In fact, there are five particular stereotypes that always ring untrue for me. Have you heard any of these comments?

1. I just assumed that with the piercings and tattoos that you did drugs.

Gee, didn't you read the section in the ‘Addict Manual' requiring substance abusers to get tattoos? This comment (and assumption) is extremely offensive, and I have never seen any correlation between people who wear tattoos, body piercings or other "body art" and drug abuse. It's true--I myself am an addict in recovery who still sports facial piercings and has plenty of tattoos. However, I've known plenty of people who favor tattoos and body piercings, but who would never use drugs. So, I can personally guarantee this stereotype is untrue.

2. Their families must not have been around for them.

Among my own circle of friends and acquaintances, I am familiar with a number of addicts who have come from wonderful, loving families. There may be statistics that support the argument that drug addiction is higher among poor or under-privileged people, it is safe to say that economics doesn't necessarily equate to growing up in an unloving home or with a non-supportive family. I believe that addicts can come from many different types of families, rich and poor, loving and unloving, and from all different walks of life. As far as I know, addiction discriminates against no one.

3. He does drugs, he must be homeless.

Although in the worst days of my drug use I did lose my home, I was able to keep a steady job the entire time I was on drugs. Now don't get me wrong, this fact does not justify my drug use at all. It should be noted, though, that many drug addicts are able to function well enough to keep their jobs and their homes. During the first job I held, I did a terrific job of hiding my drug use from my employer. When I later changed jobs, I continued for a long time to perform my job functions admirably, doing all I could to ensure I didn't jeopardize my employment so I could continue to earn the income required for my next fix. When I finally lost that job, the next job I applied for was in the fast food industry, so there was no drug testing, of course. Though I did eventually end up homeless, I kept that job until I got sober.

4. You must obviously only hang out with other addicts or junkies.

This must be a common assumption that the general population has about addicts. Yet, many addicts have mastered the art of hiding their addiction, and part of that means socializing with people who are not addicts or junkies. During my drug use I did have friends who used drugs, of course, but the majority of my friends were not addicts. A small number of my drug-using friends from those days also got sober and have been clean ever since. Of course, the friends I had who were not drug users or addicts were unaware of how bad my habits had gotten. Once I told them about my drug addiction, they tried to everything they could to be there for me along the way. It was only at the end of my long and bumpy road to recovery, full of relapses and destructive, addictive behaviors, that I managed to push all those sober friends away until they withdrew from my life.

5. You only care about yourself.

This stereotype about addicts seems to be the most common. Unless I am the only exception to the case, which I am certain cannot be so, addicts are not so self-centered that they don't care for others. Granted, I definitely was uninterested in paying my bills or caring for my body, but even in my drug-addled state I never stopped caring for others. Unfortunately, when we are deep in addiction, we do things that hurt other people, such as lying or stealing-- but that doesn't mean that addicts are uncaring people. I always gave my change to the bell ringers at holidays, donated my cans to bums, and gave rides to anyone who needed one (when I still had a vehicle, of course). I will say that my definition of "caring for others" has clearly changed since I have gotten sober. Now I show my care for others by being more present and involved, rather than by just giving them material things. However, I'd like to think that I never stopped caring; it just seemed harder to show my feelings and support when I was drowning myself in substance abuse.

There are a number of exceptions to the stereotypes we have about addicts, and there are definitely more than the five common stereotypes I've listed here. Nonetheless, it feels good to finally have a clear head and be free of any of these stereotypes because I am no longer active in my addiction. This is just one more thing to be proud of in my sober recovery.