7 Countries Where Drug Lords Lord It Over

7 Countries Where Drug Lords Lord It Over 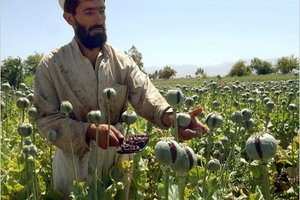 With a value currently estimated at $400 billion, drug trafficking is perhaps the most profitable illegal trade of all time. It's also the most serious organized crime problem in the world today. Governments have spent billions upon billions of dollars, not to mention thousands of lives, combating the illegal drug business, but the results of this worldwide war on drugs remain mixed.

Despite the successful dismantling of the biggest drug cartels, the killing or arrest of the most powerful drug lords and drug busts worth billions, the drug business continues to thrive. This is partly because demand never waned, and partly due to the fact that drug lords continue to produce and transport their merchandise in certain countries with near-impunity. Unlike in some countries where you don't want to get caught with drugs in, drug lords have practically made these countries their playground, applying a deadly mix of seemingly inexhaustible funds, corruption at the highest levels of government and an unflinching willingness to use brutal violence to tighten their grip on the drug trade and their respective countries.

With the fall of the Taliban in 2001, the drug lords of Afghanistan have slowly worked their way towards becoming the world's top producer of opium today. More than 90% of the world's opium is produced in the country, a major part of The Golden Crescent, the name given to Asia's principal area of illicit opium production covering Afghanistan, Iran and Pakistan.

It is believed that the opium trade flourishes in Afghanistan because Afghan government officials are said to be involved in at least 70 percent of opium trafficking in the country. Experts even say that more than a dozen provincial governors have a direct hand in the production and distribution of opium. But one of the most serious allegations of Afghan government complicity in the country's drug trade was made by Thomas Schweich, former U.S. State Department Principal Deputy Assistant Secretary for the Bureau of International Narcotics and Law Enforcement Affairs.

In a New York Times article dated July 27, 2007, Schweich alleges that the government of President Hamid Karzai is protecting opium production. As serious as these allegations are, the US military, in Schweich's opinion, look the other way and treat the drug trade as not being central to its anti-terrorism operations.

Burma (or Myanmar) is a pillar of the so-called Golden Triangle, one of Asia's two main areas of illicit opium production which also include Laos, Vietnam, and Thailand. It is the world's second largest producer of illicit opium. Run by a military junta, Burma's government has been on paper trying to eradicate opium production, but its senior officials have been persistently reported to be involved in the drugs trade, and that drug money continues to pour into government coffers.

Historically, the country has been dominated by larger-than life drug lords, the most infamous of them Khun Sa, aka "The Opium King". Khun Sa produced as much as three quarters of the world's heroin supply at one point, and was known for his ruthlessness that earned him the DEA sobriquet "Prince of Death". Although he surrendered to the Burmese government in 1996 after decades at the top of the illegal opium trade, Khun Sa was never extradited to the United States to face drug charges, and reportedly lived a life of luxury in Rangoon until his death in 2007.

Today, the Burmese drug market is dominated by the United Wa State Army. Made up of ethnic fighters who control areas along the country's eastern border with Thailand, it is said to be the largest drug-producing organization in Southeast Asia, and is believed to be an ally of the country's ruling military junta.

You know a country has a very serious drug trade problem when one of its most-wanted drug traffickers makes it to the Forbes list of the richest persons in the world. Joaquin "Shorty" Guzman, leader of the Sinaloa drug cartel in Mexico, was just recently listed by Forbes as the 701st richest person in the world with a net worth estimated at $1 billion.

The Guzman-led Sinaloa cartel is just one of the four major drug cartels wreaking havoc in Mexico, the major transit point for over 90% of America's cocaine supply. With the dismantling of Colombia's Medellín and Cali cartels, Mexico's Sinaloa, Juarez, Tijuana and the Gulf cartels have become the predominant smugglers and wholesale distributors of South American cocaine and Mexico-produced marijuana, methamphetamine and heroin. These cartels have grown increasingly wealthy and powerful over the years, and if their ongoing war against the Mexican and US government is any indication, have become increasingly violent as well.

Since the beginning of 2008, more than 7,000 people have been killed in the drug-fueled violence that has practically turned some parts of Mexico into a virtual war zone. Killing civilians and beheading rivals from other cartels, policemen and soldiers have become commonplace, and the efforts of the US and Mexican governments to put them down hasn't yielded any significant results just yet. Equipped with grenade launchers, automatic weapons, body armor, Kevlar helmets, these cartels are some of the most sophisticated and dangerous organized criminal groups ever faced by the US government.

For all the successes of Plan Colombia, the US-led counter narcotics operation in the country, Colombia continues its reign at the top of the cocaine trade due to the fact that smaller and more nimble organizations have sprung in the Medellin and Cali cartels' place, most notably the Norte del Valle Cartel, or North Valley Cartel. Widely considered as one of the most powerful organizations in the illegal drugs trade, it is said to be employing the services of the United Self-Defense Forces of Colombia (AUC), a right-wing paramilitary organization, to protect its cartel's drug routes, laboratories and its members and associates.

Other existing players in Colombia's drug trade include the smaller North Coast Cartel and the Marxist guerrilla group FARC, which has become increasingly involved in the drug trade, controlling farming, production and exportation of cocaine in those areas of Colombia under their control.

Peru is the second biggest producer of cocaine in the world, next only to Colombia. Historically, Peruvian farmers have been growing coca, the raw ingredient for cocaine, since before Spain colonized the country centuries ago. They continue to do so, considering that coca itself is legal, but making cocaine from it is not. Nevertheless, studies show that as much as 90 percent of that coca goes to the production of cocaine, a fact which contributes greatly to the growth of a multibillion-dollar shadow economy in Peru.

Further complicating Peru's drug problems is the resurgence of a supposedly inactive Shining Path, a Maoist organization whose guerilla war with the government has claimed the lives of more than 70,000, as a major force in the Peruvian drug trade. Taking their cue from Colombia's FARC and AUC, the group has now fully evolved into an illicit drug enterprise, protecting drug smugglers, extorting taxes from farmers and operating its own cocaine laboratories with an efficiency and ruthlessness that is the unmistakable trademark of an elite drug trafficking organization.

Ranking third behind Colombia and Peru in cocaine production is Bolivia, which, according to a recent United Nations report, has allocated 28,900 hectares of its land to coca production in 2007, a figure that is more than double than what Bolivian law allows. This leniency towards coca growing, however, is hardly surprising, considering that the sitting president, Evo Morales, did not only farm coca himself during his youth, but was also head of Bolivia's coca growers association before he became president.

Last year, Bolivia under Morales has been blacklisted by the United States as a country which resists "international cooperation" on the drug trade, along with Burma and Venezuela. While this move by the US is largely perceived as a retaliatory political move after Morales kicked out the US Ambassador and agents of the DEA from the country, it is not entirely baseless. The production of coca in the country has grown steadily since Morales took office. And while coca itself is legal and an essential component of Bolivian culture, the legal market for the stimulant just could not absorb the ballooning production, resulting in the diversion of a large percentage of the crop to the production of cocaine.

Adding more to Bolivia's drug woes is the fact that Bolivian drug lords have become more sophisticated and ultimately violent, churning out the illegal drug faster through state of the art laboratories, as well as starting violent turf battles that threaten to turn the country into another Mexico.

Apart from being a top cocaine producer, Bolivia is steadily assuming the role of a major transit point for cocaine shipments from Peru to Brazil.

For such a tiny island nation like The Bahamas, it sure has a thriving illegal drugs trade. A recently released United States narcotics report has revealed that more than a dozen drug-trafficking organizations are operating in this Commonwealth territory. This underlies the central role in drug smuggling that it has assumed over the last two decades, starting with Medellin Cartel cofounder Carlos Lehder's initiative to use The Bahamas as a transit point for drugs from Colombia into the United States. Lehder, who is currently incarcerated in the US, even went to the extent of commandeering an entire Bahamian island, called Norman's Cay, and made it his own drug fortress, where 300 kilograms of cocaine would arrive every hour.

While the current Bahamian government is closely cooperating with the US on its war against drugs, it is interesting to note that the island nation was once rocked by serious allegations that involvement in the drug trade reached the highest levels of government, with no less than the late former Prime Minister Sir Lynden Pindling allegedly receiving more than $57 million in drug money in the mid-1980s. Although a royal commission formed to investigate the accusations found no conclusive evidence to implicate Pindling, the scandal further perpetuated the idea that an entire government can be paid off, something that most drug cartels and syndicates around the world have done, and will continue doing, as long as they are in business.