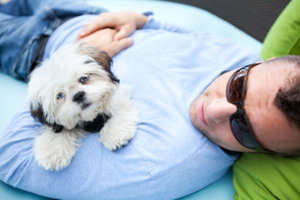 Dogs in the Betty Ford Center. Horses at Hazelden. Wolfdogs and young addicts in L.A. The use of animal-assisted therapy is increasingly used in addiction recovery, as well as many other fields.

So how does it work? The point is not that the animal is supposed to replace a human relationship, according to Phil Tedeschi, founder and director of the Institute for Human-Animal Interaction at the University of Denver. Animal-assisted therapy instead aims to be a bridge back to healthy relationships with other humans.

As anyone in addiction recovery knows, trust issues are the norm. Most addicts have burned others and been burned by others. After this has happened, it becomes difficult to rely on your instincts about who to trust. Animals lack the emotional agendas of humans. You treat the animal well, and it will likely reciprocate. Developing a bond with an animal can open an addict's heart and help to develop healthy bonds with humans again.

One study done by Seton Addictions Services in Troy, NY, found that patients opened up to addiction counselors more about their personal histories while dogs were present. Counselors gained insights into patients' emotional and behavioral patterns and could guide them to better interaction choices. For example, when patients were annoyed that a dog didn't immediately want to bond, the counselor could suggest ways to slow down and gain the dog's trust.

While dogs are the most common therapy animals – easy to come by, fairly obedient, of a manageable size and easy to take them almost anywhere – many other animals are also used. The famous Hazelden recovery center in Minnesota introduced equine-assisted rehab therapy in 2005. Now some patients participate in an eight-week program that integrates horses with the 12 steps of recovery. The focus is more on interacting with horses on the ground rather than riding them. Several other rehab centers are now using equine therapy and other types of animal-assisted therapy.

Lynn Moore, the addiction counselor who developed Hazelden's equine program, says that horses mirror human feelings. Patients who have lost all touch with their emotions find that horses can stir up joy, fear, sadness, anger, loneliness, resentment and peace. She recommends equine-assisted therapy for patients who over-intellectualize. Horses, she says, help people get out of their heads and back into their bodies and hearts.

You could draw a pretty good analogy here: As wolfdogs are to dogs, addicts are to "normal" humans. While genetically similar to their "normal" counterparts in their respective species, wolfdogs and addicts don't quite fit in. They're considered dangerous in their societies.

Wolfdogs – hybrids that are too dog-like to survive in the wild but too wolf-like to be adoptable – really get a bum deal. Many are abused, neglected and abandoned. They might be confiscated by authorities, taken to a shelter and euthanized. Young addicts from messed up homes can relate to the difficult path that a wolfdog typically must journey on.

Promises, a West Los Angeles addiction treatment center, teamed up with Wolf Connection, which rescues wolfdogs. Now wolf therapy is part of Promises' treatment for young adults. While the young addicts help save the wolfdogs from death, the wolfdogs teach their human caregivers wolf principles. These include teamwork, respect, setting and maintaining boundaries, forgiveness, trust and acceptance.

In 2012, more than half of the U.S. incarcerated population was doing time for drug charges. Prison dog training programs are not aimed solely at recovering addicts, but this type of animal intervention is important for many folks who are beginning recovery behind bars.

Prison dog training programs have popped up around the U.S. in recent years. Often the dogs themselves are on death row – about to be euthanized by local animal shelters – when they're rescued and distributed to inmates. Prisoners see themselves in the dogs, according to Tedeschi, who works closely with prisoners in the program at Colorado Prison. As prisoners rehabilitate the unwanted pets, they begin to rehabilitate themselves. Usually the prisoners train the puppies until they're between one and two years old, then hand them off to Tedeschi's grad students in the School of Social Work for further training as therapy dogs. Both prisoners and dogs thrive under this system. The men and women in the training program are the most successful inmates upon release, Tedeschi says.

Most addicts have alienated at least some of their friends, family, colleagues and acquaintances by the time they hit bottom. Addicts can feel disgusting, dehumanized and thoroughly unlovable. But animals see people differently than other people do. As long as you treat the animal well, it doesn't care whether you're rich or poor, or have scars on your body and soul.

The beauty of animal-assisted therapy is that it's two-way. The addict needs somebody who cares about him or her. The animal needs someone to care for it. The act of taking care of an animal turns an addict into someone who cares for another living creature.

Teresa Bergen is a Portland, Oregon-based health, fitness and travel writer. She enjoys exploring the human-animal connection in her writing and in her life.