Are E-cigarettes the Lesser of Two Evils?

Are E-cigarettes the Lesser of Two Evils? 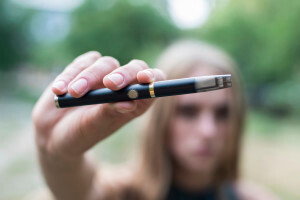 E-cigarettes are electronic devices that have come into popular use after being initially created to replace cigarettes and/or wean smokers off dangerous chemical effects of nicotine. They have several names but the terms most often used to describe these devices for vaping are "vapes" or vaporizers.

Today, entire stores are devoted to the practice of inhaling vapors through the mechanisms being developed and constantly upgraded as "e-cigarettes." There are many models, styles and combinations of flavors to choose from. There are customized vapors as well as holders, allowing for a wide variety of experiences with "vapes."

What We Know About Them

At the beginning of the conversation about vaporizing, there was little risk seen with the devices or the manner of delivery for the product. Concern with the chemicals used for the vapors in e-cigarettes, however, has risen since their early inception. This is due to the fact that some of the problematic effects of the chemicals are seen at higher temperatures. These temperatures were not possible with the early types sold. Today, there is a much higher temperature that's possible in vaping.

This chemical, propylene glycol, a common component in e-cigarettes, is known to cause eye and lung irritation. It carries a warning from the manufacturer, Dow Chemical Company, against inhalation. Additionally, the toxic formation of carbonyls is even higher than that produced from tobacco products. This is the danger seen at higher temperatures that can be achieved with newer models of e-cigarettes.

Some of the carbonyls shown to be formed are formaldehyde, acetaldehyde, acetone and butanol. Added to this risk are the flavorings added to the vapor liquids to make them taste like flavors ranging from bubble gum to rum. While they are listed as safe ingredients for consumption in food substances, vaporizing these compounds with propylene glycol may produce far different results.

While research is ongoing, there is no definitive information about e-cigarettes that raises alarms at this time. However, there are several factors that bring up the conversation about regulating them in ways similar to tobacco products.

First of all, there is no age requirement for buying e-cigarettes which makes them widely popular with adolescents and pre-teens. Since there are recognized health risks possible, it would seem that this makes a good argument for regulation of sale for use of this product.

Many manufacturers are targeting this specific population for marketing purposes. Even if the use of "vapes" is as innocuous as they argue, the habit of smoking these may increase chances for addiction, which may raise the possibility of moving from this product to tobacco use in the young.

Additionally, many users have already created ways to use other substances with e-cigarettes. Allowing minors to use them increases the possible risk of moving into use of substances that can be masked by "vaping."

Until specific health benefits can be recognized over the use of tobacco, one argument for regulation remains consistent: age requirements should be legislated.

Again, research has shown little consistent data with e-cigarette use. Comparison is drawn between a known danger, tobacco product use, and that of vapors. This is similar to stating that it is safer to shoot someone in the foot than to shoot them in the head. Or to say that use of strychnine is more favorable than use of arsenic or vice-versa. When something as dangerous and addictive as nicotine in tobacco products is compared to a less dangerous practice, there is considerable risk involved either way.

There is some evidence that health risks are present with use of vapors. There is also some evidence that secondary exposure to vapors is harmful. At any time, there is little benefit for human consumption of chemical compounds such as those produced by or used in either product.

Until the exact extent of danger of these products is known, perhaps the burden of proof should be on the manufacturers of the products to show a benefit of their use. Why smoke at all? What possible benefit can be found for developing a taste for vapors of chemical compounds?

The most common reason people use e-cigarettes is to help themselves stop smoking tobacco products. Many former smokers remain steadfast in their support of vaporizing as a means of substitution of tobacco. However, thousands, if not millions, of former smokers have shown that there is no need for this product to stop smoking tobacco products. That argument simply does not hold together.