Binge Drinking: Is Indulging Once Bad for Your Health?

Binge Drinking: Is Indulging Once Bad for Your Health? 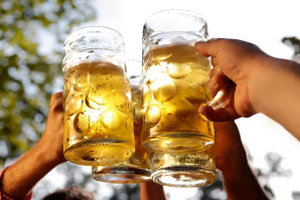 A recent study has found that as little as one isolated episode of binge drinking is detrimental to an individual's health. Researchers at the University of Massachusetts Medical School conducted the study under the lead of Professor Gyongyi Szabo. The researchers discovered that when the blood alcohol level of participants (11 men and 14 women) was raised to at least 0.08g/dl in the span of one hour, bacteria was leaked from the gut and the toxins released triggered immune responses that could be potentially dangerous to health – like fever, tissue destruction, and inflammation.

Binge drinking is prevalent throughout the U.S., especially with young adults. Having more than one drink is now the norm across college campuses and within subcultures such as sports, music festivals, etc.

A broad definition of binge drinking is drinking in order to become intoxicated via heavy alcohol consumption over the course of a short amount of time. It is said that as many as one third of adolescents binge drink and the behavior is more common in males than females. It's not difficult to see this behavior glamorized in the media or even at an office holiday party, but make no mistake: binge drinking is dangerous territory.

Frequent binge drinking can affect the neurological, cardiac and gastrointestinal systems of the body. More than five drinks for a male and more than four standard drinks for a female in one sitting is considered binging.

Since binge drinking generally overlaps with social drinking, it is often overlooked as it's considered a part of regular social activity. The results from this study are especially important because of the widespread cultural acceptance of binge drinking. We now know that deterioration in the body begins from the first binge drinking episode--this is powerful information which will hopefully help to reduce this dangerous behavior.

If you or someone you know binge drinks, there are resources both online and offline that can help. While binge drinking can be a sign of a deeper addiction, we now know that even engaging in such behavior even infrequently can be detrimental to one's health.