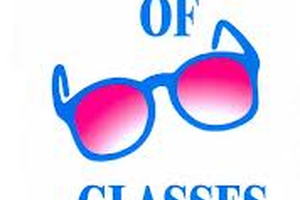 A New Pair of Glasses is a popular book in 12-step communities written from a transcribed series of talks given over several daysto groups by Chuck "C", a much respected member of the 12-step group, Alcoholics Anonymous. In it, the author repeatedly states, "What you think of me is none of my business."

This phrase is repeated in meetings of many 12-step groups, but its original meaning and context have become eroded over time. In stating this phrase, the spirit in which he uses it is to free himself from attempting to please or placate others by behaving in ways or talking in ways that will make him popular to that person or persons. There is a tremendous amount of freedom in this phrase for those in substance abuse recovery. Because one of the common traits of an addict is their intense self-absorbed egocentrism, they are constantly taking center stage and performing for others. What happens quite often is that they have lost track of who they are. There has been so much energy put into being liked by everyone that they have forgotten what it is that they stand for and what they truly care about.

In finding their sense of identity in recovery, they begin to acquaint themselves with who and what they are. This can be scary as they realize that there will be people who don't like some of their ideas and beliefs. While this has been true all along, they are not aware of that. They have so many people-pleasing behaviors that do not serve their truth that they are not sure how to let go of trying to please everyone. Complete freedom can be found by simply adopting the notion that "what you think of me is none of my business." While some use this as an aggressive and belligerent attitude to further isolate themselves from their fellows, a balance can be found in recognizing that others may have a differing set of beliefs, but it doesn't need to keep us apart. In fact, learning to respect our own beliefs and truths will give us permission to respect and honor those of others, even when they differ.

This is a big step in recovery! Accepting that they can disagree with someone's opinions, beliefs, lifestyle and ways of doing things without being disagreeable is immensely empowering and unifying for individuals and as a collective society. Many addicts have looked only for the differences between themselves and others in order to isolate themselves further from their peers. Using this phrase will allow them to keep their minds open to non-judgment and embracing the differences.

Opinions can be hurtful when aired. They are best left unspoken. Opinions are judgments that many people have not learned to keep to themselves. When shared and aired about others, they become gossip. There is no gain in gossip, only damage. It is empowering, indeed, to let someone know that while they are free to believe what they want about a person or situation, but it is better kept unspoken. Everyone then becomes freer and can focus on unification and fellowship, rather than pulling others down to build up a damaged and broken ego.

This is what real recovery is all about. Thank you Chuck "C"!