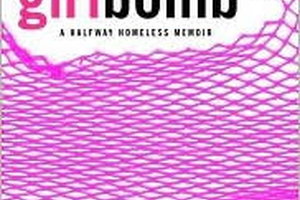 Upon first glance, you might think Girl Bomb is just another coming of age story that is complicated by drugs and the mean streets of New York. You might also think it's an autobiography that centers around Erlbaum's quest for independence, street credentials, and boys, or that it's some silly story of a bratty girl who's destined to become just another street kid with no future. Instead, what you find when you read this book is glimpses of your own adolescence, eloquent descriptions of feelings that you have felt a hundred different times but could never put into words, and the account of a girl that society has mistaken for weak that ultimately proves everyone wrong.

Janice Erlbaum decides to leave home at the age of 15 after watching her step-father's repeated abuse of her mother. Without a plan or any place to go, Erlbaum ends up at a shelter and has to learn a whole new set of rules for survival. What Erlbaum also learned was how to numb her feelings with various substances, including alcohol, cocaine, and angel dust. She struggles with peer pressure, acceptance, and issues with self-esteem amongst her friends and boyfriends. Erlbaum becomes a tornado of self-destruction, and her greatest fight becomes the one she has waged against herself.

In addition to struggling with substances and the dangers associated with running the streets of New York, Erlbaum also navigates her way through a dysfunctional and complex relationship with her mother, who is dealing with her own symptoms of depression and anxiety after being in an abusive relationship. Amidst her feelings of betrayal and uncertainty, Erlbaum also deals with feelings of guilt over leaving her little brother to continue to witness the ongoing abuse when she runs away from home.

Throughout this book, the reader is waiting for something catastrophic to happen, as it seems inevitable that Erlbaum will be seriously hurt or may even die as a result of the choices she makes. With each chapter comes a new source of danger, with each turn of the page comes a stronger impending sense of doom. Throughout her teenage years, Erlbaum associates drugs with power and control - she uses drugs to control her emotions and the people around her, until she is completely out of control herself. Against all odds, Erlbaum not only manages to survive, but even goes on to graduate high school and follow her dreams of becoming a writer.

In addition to becoming a writer, Erlbaum also manages to make people think about the preconceived notions they have about drug addicts and about young women. Most people think of drug addicts as non functioning junkies that duck in and out of the shadows that society has cast upon them; Erlbaum steps out of these shadows and into the spotlight as a talented author and poet and fearlessly puts her life on display for all to see. Most people think of teenage girls as innocent, demure, and naïve; Erlbaum proves herself as a strong, independent woman that comes out on the other side of adolescence having survived more than most experience in a lifetime.