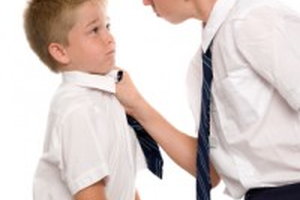 According to the Substance Abuse and Mental Health Services Administration (SAMHSA), October is the month when recognition and awareness of bullying is a focus nationwide, and issue that affects millions of children and teens annually.

The focus of this article will be on the common characteristics or co-occurring tendencies for bullying and substance abuse in young teens and adolescents. There are more than a few commonalities, according to Frances M. Harding, the Director of Center for Substance Abuse Prevention, in a recent article for SAMHSA. Because there is a national problem with both behaviors, and the impact is so great on the young, educating the public is an important task.

At-risk youth are those who are showing signs of being troubled. They are having difficulty in school and in the community, are beginning to experiment with substance use and underage drinking, and are exhibiting other problem behaviors that are classic examples of heading in the wrong direction behaviorally. Most of these at-risk kids are more likely to bully those who are younger and less capable of fighting back. As their behaviors escalate, they begin to rob those younger than they are and to use this money to obtain drugs and other substances.

Bullying behaviors are an indicator that things may not be going in a positive direction for these kids. There may be problems at home, little or no family support and oversight, overly permissive or absent parents, and many other factors in the home that lead to behavioral acting out in young children. They may come from a home that is using and/or abusing drugs and alcohol, as well. This will incite the children from a home like that, many times, to bully others in order to gain attention and acceptance in the only way they can find. Appropriate bonding and friendship skills are not part of what they are being taught in the home. As they become more and more involved in substance abuse and bullying, they become part of a social group that is doing the same things. They will become more entrenched in the behavioral patterns of the group they belong to.

As the behavior becomes more aggressive, it becomes obvious to others that the young person is now verging on delinquency and becoming a bigger social problem that must be dealt with. If caught in the early stages, proper parenting, counseling, and therapy can go a long way toward reforming this child. However, it is up to those who have access to the young person to recognize and redirect her or him down a different path. If parents are not available or engaged in the process, it may be a daunting job for teachers, religious advisers or community members to address.

What is needed are intervention programs in the community that can avert this behavior before it becomes more socially problematic than it is at this stage. If recognized in time, perhaps the young person can be turned around before they get involved in more criminal and injurious behaviors, such as joining gangs where the bullying and experimentation with substances can become lifestyles.

An afterthought for further discussion is the issue about whether the victims of bullies are more apt to subsequently turn to substance abuse for consolation and comfort; more to follow.