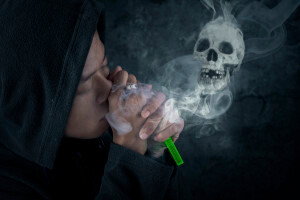 Florida seems to be the point of entry for "flakka," a new drug reportedly coming primarily from China, India and Pakistan. The substance's frightening effects has been seen to put a number of Florida residents in the headlines, emergency rooms and in the hands of local police.

In April 2015, flakka exploded in the media after causing erratic and delusional behavior. According to Florida police, it has similar effect as another recreational designer drug termed "bath salts."

Flakka, sometimes referred to as "gravel" due to its small crystal pebbles and foul odor is produced from cathinones, a naturally occurring amphetamine-like stimulant found in the khat plant. Much like the coca plant in South America, some cultures are known to chew on khat leaves to achieve euphoria.

The active ingredient found in flakka is alpha-PVP, which is a substance banned by the U.S. Drug Enforcement Agency (DEA) in 2014, although it continues to be found in vast amounts throughout parts of the U.S. Last year in Broward County, Florida, there were 200 cases filed against laboratories reportedly using alpha-PVP. Within the first three months of 2015, Florida officials reported having discovered more than 300 cases within state.

How does it affect the body?

Flakka affects the user's central nervous system by stopping the re-uptake of the chemical compounds dopamine and norepinephrine. These two chemicals in the brain, known as the "pleasure chemicals," then flood the brain causing a concentrated pleasure effect. This is similar to the brain's reaction with other amphetamine drugs.

What are symptoms of flakka?

As the user increases the dose, which can be easily done as the amount of flakka needed to get high is both small and inexpensive, they begin to experience heart palpitations, shortness of breath, rapid heartbeat, increased excitability and a very intense sense of pleasurable euphoria. This is quickly lost, however, as their brain begins to produce hallucinations and delusions due to higher concentrations of dopamine and norepinephrine.

Most users experience a spike in body heat up to 106 degrees farenheit, explaining the tendency for them to take off clothing and run around naked, as seen with many recently reported incidents in Florida.

The user becomes very agitated and violent as their adrenaline soars, along with surges of super-human strength. Police report that some users require up to four officers to subdue and restrain them. Intense paranoia and hallucinations added to their intense violent reaction to the drug make these users frightening to deal with.

What are the dangers of flakka?

The most serious risk around use of flakka is that it takes only a tenth of a gram to have strong effect on the brain chemistry of the user. This amount currently costs only $4 to $5 on the streets. Due to this low cost and the small dose required, users will experiment with higher doses and begin to experience dangerous side effects.

As the dose increases, so does its effect on the user's brain chemistry. This leads to a state known as "excited delirium." Users become extremely agitated, highly excitable and delirious. This effect becomes longer lasting, the higher the dose.

High body temperatures, when sustained for any period of time, create the breakdown of internal muscle tissue, which are then released into the bloodstream, leading to kidney failure. Heart attack is also a common side effect of sustained, increased heart rate from use of flakka.

Some users also experience extended periods of psychosis, as a result of the drug. As with similar drugs, it is possible for permanent psychosis to occur, along with psychotic episodes that may be a long-term problem for users.

There is also no "build up" of effects with flakka. The user does not develop tolerance or the need to up their doses overtime to get the same high,nor does a user develop tolerance to higher doses. This makes it possible to reach an overdose at any point, from the first or 100th use.

Another dangerous factor with using flakka is the user's ability to mask their drug use with vaping, or inhaling vapor through an e-cigarette or similar device. Virtually unknown to others, flakka is easy to mask in this fashion, making it easy to use in public. Flakka, however, can also be smoked, inhaled, snorted, injected or swallowed.