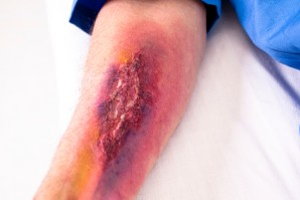 Krokodil is a scary new drug now making headlines in the U.S. Its effects are so graphic and devastating, users look like they stepped out of a horror film (the pic we opted for is relatively easy on the eyes. Search for more images if you must, but don't say we didn't warn you.). Named for the Russian word crocodile, this deadly homemade heroin destroys human flesh from the inside out and, thus, is being dubbed "the zombie drug."

The components of the drug—codeine, iodine, and toxic substances like gasoline, lighter fluid, paint thinner, and industrial cleaning oil—cause blood vessels to burst which, in turn, leaves the skin green and scaly, eventually leading to gangrene.

Created in Russia, where heroin is difficult to obtain, krokodil has claimed the lives of roughly 30,000 people per year since first appearing 10 years ago, and an estimated 250,000 Russians are now addicted to the drug. With such devastating effects on the body, coupled with a high death rate, the United States is on guard as the drug has recently been reported to have made its way to the U.S.

Why Krokodil? Who Would Take This?

Desperate drug addicts are attracted to this drug because it is substantially less expensive than heroin—running between $6-8 per injection—and gives the user a similar high. While Russia has a severe shortage of heroin, drug officials in the U.S. are unconvinced that krokodil will become popular in the states due to the abundance of heroin and widespread availability of other opiate drugs.

Created from codeine tablets with lighter fluid or paint thinner, krokodil is a highly toxic substance. Most users inject the drug, which allows them to receive the high immediately. Pills take up to 20 minutes to become effective. Desomorphine, the active ingredient in codeine, is a faster acting agent than morphine. This drug is between 8 to 10 times more potent and addictive than morphine.

The ingredients used in producing Krokodil are what make it so toxic for consumption. Using red phosphorous and combustible liquids in its production, the drug has properties that cause abscesses and rotting of flesh, as seen in gangrene. Pictures of users are gruesome and make a compelling statement for avoiding this drug. The flesh is literally dissolved away from the arms and legs, leaving bones exposed. Surgical intervention may stop the spread of the condition, but many users are dying within the two-year period after onset of use. Treatment for advanced symptoms is amputation of limbs that suffer from necrosis (rotting flesh).

Desomorphine is rapidly synthesized in the body, making the presence of krokodil difficult to trace. This is another reason for users to try it. Those who are drug-testing may decide that this factor is appealing, in order to test clean.

Where Krokodil Has Been Reported

In 2011, there was one reported case of krokodil use in Memphis, the first known in the US. Since then, other reported cases have been investigated, but not confirmed. The two separately reported cases in Arizona have recently been met with alarm and immediate investigation. While both parties reported use of krokodil, it has not yet been verified by the doctors who are looking into it. Medical reports do not include symptoms of side effects suffered in these cases at this time.

Despite its deadly side effects, krokodil use in Russia has not slowed, even with new laws to stop availability of codeine. Once sold over the counter for headache treatment, it is now listed and regulated as a controlled substance. Authorities fear that easy production of krokodil will increase use in the U.S. by those who can easily market the drug as heroin and make greater profits off addicts compelled to use. Indications with Russian addicts point to the same danger. Even those who know the risk use it because they are hooked and nothing else is available.