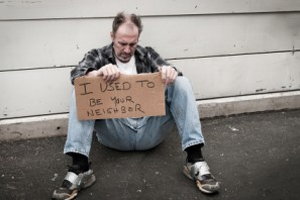 According to a survey by the United States Conference of Mayors in 2008, cities responding to the request to name the top three reasons for homelessness, 68% of cities reported that substance abuse was the number one factor for individuals and 12% for families. According to another study done in 2007 by Didenko and Pandratz, two-thirds of the homeless people themselves indicated that substance abuse was the cause of their homelessness.

However, this information can be highly misleading. Some instances of homelessness are eased by substance abuse, not caused. A report by the National Coalition for the Homeless, published in 2009 iterates this verdict beautifully. Citing homelessness as a product of drug addiction is too simple an explanation. Mental illness, often a causal factor in addiction, is highly co-occurring with homelessness.

Since the early 1990s when we began to eliminate housing for the mentally ill in the US, homelessness has become a growing problem in our cities. Numbers of the mentally ill were displaced, without adequate alternative housing made available. For most of those persons, living on the streets was the best solution they could find. Holding jobs, paying bills, food preparation and acquisition, simple day to day tasks for most, are challenging, due to their mental illness. Many do not want to take the medications that make them normal (in the minds of society). They prefer to make choices to live as they can without the cares and concerns of housing, employment, and medication management. Many turn to substance abuse as a survival tool.

Because they abuse alcohol and/or drugs, it is easy to place blame on substances as the causal factor in their homelessness. However, many of them abuse substances primarily to offset the conditions in which they live.

They may go to the streets to find the companionship of others like themselves who comfort and protect them. They form communities where they feel safer than they do alone, and when they attempt to function in a world where they must be medicated with drugs that do not allow them the dignity of free choice.

Sadly, many shelters and homeless programs impose restrictions on those they serve that are not in line with what they want for themselves. There are religious organizations that mandate practices that may not match those they serve, as well as not allowing for their personal beliefs. While the intentions of these organizations may be applauded, they need to allow personal choice to rule. Enforced spiritual principles, or even enforced recovery from substance abuse, do not always feel like choices to the homeless.