How Mexican Drug Cartels Impact Our War on Drugs

How Mexican Drug Cartels Impact Our War on Drugs 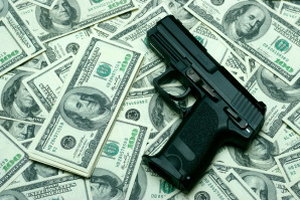 As Mexican drug cartels expand their operations beyond drug, weapon and people trafficking, the United States' War on Drugs will have to change.

For example, Time magazine recently reported that the Caballeros Templarios, or Knights Templar, cartel located in western Mexico has gone into the business of mining and selling iron ore. This sideline is actually more lucrative than drug trafficking, though it finances the criminal enterprise.

In the period between 2007 and 2012, at least 60,000 murders were tied to the Mexican drug cartels. Although the Mexican government took a passive stance towards the cartels, escalating violence and tension with the United States has prompted a more proactive approach.

Since the election of Mexican President Felipe Calderon in 2006, government forces have been pursuing head cartel bosses and actively working to put an end to all cartel activities. Combined efforts between them and American border agents and drug task forces has brought about the arrest of many of the cartels' highest members. The war on drugs has been long-standing, brutal and traumatizing not only to Mexico but also to the United States, who've also had to face their share of travesties.

Cartels Reach into the United States

Many cities along the United States and Mexican border report escalating violence from cartels. Some of the reports include home invasions, abductions, beatings, rape and murder. However, this violence does not only occur along the borders. In 2009, the Justice Department reported cartel presence in 230 major cities, including as far north as Anchorage, Alaska. In many small rural agricultural communities, the cartels force Mexican field workers to carry out their violent activities and use the migrant communities as a locale from which to operate.

According to recent Department of Justice figures, the cartels now have nearly a monopoly on drug sales and distribution in the United States. Thus, whether it is methamphetamine or heroin, marijuana or crack cocaine, the cartels are operating from the level of street sales up to the importation of large quantities into the U.S. American street gangs, always on the lookout for money-making opportunities, are also increasing as the cartels' representatives on the street. These representatives go as far as use intimidation to get law-abiding citizens to launder money, provide safe houses and extort money to fuel cartel activities.

This monopoly means that the cartels control an increasing number of illegal and semi-legal international operations. One result of the Mexican drug war and increased surveillance and control by U.S. immigration and drug task force personnel has been to push the cartels into other money-making enterprises. Thus, the Caballeros Templarios entrance into iron mining and ore sales. Time magazine warns that this expansion indicates that the cartels are increasingly embedded in the Mexican economy and thus they will become more difficult to eradicate.

This expansion demands a rethinking of the cartels as simply drug traffickers and requires policies to shift. To police the cartels' activities, the governments needs to focus on broader criminal enterprise violations. The cartels' reach into the United States is eerily reminiscent of the rise of the American mafia through illegal alcohol production, running and sales in the 1920s. American history proves that defeating such criminal enterprises are not only expensive and time consuming, but they are costly in terms of lives and social disruption.

With the expansion of the Mexican drug cartels into legitimate and semi-legitimate business activities, they become more difficult to root out. As part of the economy in both Mexico and the United States, cartel operatives represent a clear and present danger to both nations' social structure. With a divided political structure, American government appears stymied in their approach to thee cartels, focusing instead on policing undocumented immigrants rather than proactively attacking dangerous illicit activities and escalating economic entrenchment of cartel gangs.

Cryste Harvey is a writer, college English major and interested in drug issues in the United States. She is currently pursuing a degree in journalism and hopes that she will be able to have an impact on the War on Drugs. Having witnessed several loved ones suffer from the escalating drug issues that the United States is facing, her goal is to educate others on what is happening throughout the country.