How Recovery Has Helped Tim McGraw in His Music Career

How Recovery Has Helped Tim McGraw in His Music Career 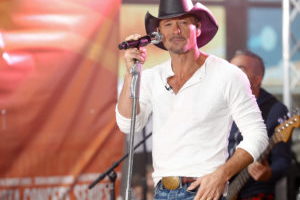 Not many people would associate wild, drunken parties with any of today's country music superstars, however, superstar Tim McGraw recently opened up to Men's Health magazine about his previous party days and his new view on life. Now 47 years and married to fellow country music star, Faith Hill, he has lifted the veil off his younger years on tour.

Tim candidly spoke of his wild and crazy after parties during his tours, as had a problem big problem with alcoholism. Maybe he drank to try to cope with the stress he accumulated after going through long strenuous days and even demanding tours. Or perhaps he just liked the party scene, but either way, he recounts the measures he took to hide his drinking problem from his wife.

He admitted that he learned to text via cell phones because of the several instances when he would be very drunk and call his wife after shows slurring his words. After one particular show, Tim realized that he started slurring on his text messages too. His messages had non-sensible statements, as well as several errors. It is at this moment that it dawned on him that he needed to stop drinking.

Tim has been sober for approximately four years now. He wants to share his story in order to raise awareness on addiction and its dangers. He wants to show people what they can lose if they do not stop their addictions. Though Tim's wife initially tolerated Tim's addiction, she eventually got fed up and issued him with an ultimatum to stop drinking or lose his family. Faith's ultimatum served as a wake-up call to Tim. It is with the realization that he stood to lose his family if he did not get sober that spurred him into action. For many men, family means everything, as they tend to think that losing their family is worse than monetary or career losses.

Today, Tim is sitting pretty on top of the world. He is happy, healthy and content. Though Tim has been successful in his music career for decades, his music career has been wildly successful ever since he quit drinking. Tim's drinking was adversely affecting his relationships, consequently, it was getting in the way of the things he wanted to accomplish in life. He credits his wife with saving him from certain death.

Having quit drinking in 2008, McGraw has shifted much of his focus to his health and music career. He has dominated the charts with several number one singles. His double CD collection released in 2010 had the phenomenal charts topper; "Felt Good on My Lips". His studio album, Southern Voice, debuted at position one on Billboard's Top Country Albums chart. The album featured the hit single; "It's a Business Doing Pleasure With You."

He then went on a tour known as the Southern Voice tour, which was ranked as 2010's number one Country music tour. He has since won several awards. With his growing success, McGraw has been engaged in numerous charitable endeavors, including the Nashville Rising. This concert aimed to raise two million dollars to benefit the Community Foundation of Middle Tennessee in response to an early May flood that saw 22 people lose their lives and approximately two billion dollars' worth of damage.

It seems as if sobriety is doing Tim McGraw quite well, which is wonderful news and an inspiration to many.