Why I Had to Hit Rock Bottom to Get Sober

Why I Had to Hit Rock Bottom to Get Sober 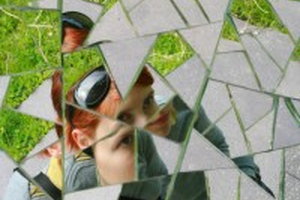 I stood in my bathroom staring at my reflection in the mirror. I barely recognized myself. How did I get here? What happened to me? I just stared. I looked the same on the outside, but I had no idea who I was on the inside. I hated what I saw. I hated what I had become. I felt so empty and alone. I was completely broken. After a lifetime of abusing alcohol and drugs, telling lies, and keeping secrets, I knew I would rather be dead than continue being me. I watched myself swallow the first handful of pills.

I graduated from an Ivy League university. I earned my doctorate degree with stellar evaluations. I held an important position in my professional life. I defined myself by my achievements. I had to be perfect, and when I wasn't, I felt crippling humiliation. I refused to look deep inside and acknowledge the scared, anxious, introverted young girl that contrasted with my perfectly created persona.

I began using at the age of 16. I quickly developed a fondness for alcohol and eventually drugs. I started off as a binge user like so many others. I graduated to daily user after a few years. It worked amazingly well for me in social situations. It felt good to let go of the anxiety and stressors of the moment. I thought it was the perfect answer to decrease my anxieties and alleviate those inner feelings that were in stark contrast to the image I wanted people to see. I remained professionally and personally functional for 22 years. I thought I had control, but it was the monster inside who was leading the charge.

My path to the bottom spiraled when my mother was diagnosed with cancer. I was slowly losing control as I watched her wither away. I continued to work full-time as well as care for her and my father. I was fine I told everyone. I became more dependent on using. It gave me energy when I needed it and relaxed me when I needed sleep. It was a vicious cycle, but I didn't care. It worked. I had never intended my using to progress to that level of dependence but what alcoholic or addict does? It seemed to have snuck up on me. The monster was achieving its goal to kill me and I willingly followed.

I refused to ask for help. It was contrary to everything I was supposed to be. Asking for help meant exposing my shameful secrets. I struggled for months. I knew I was severely abusing alcohol and drugs, but I had no idea I was an alcoholic and an addict. I wasn't one of those people. As time went on even the alcohol and drugs were not working to stop the racing thoughts in my head. I knew I would never seek help for substance abuse because then I would have to admit I was not in control and that I had failed. I would have to show vulnerability. I would rather die than expose myself. My journey to recovery started with a Baker Act after my suicide attempt.

I spent several days in the ICU after my significant other found me unconscious in my bedroom. I was told I was lucky to be alive. They said just a little bit longer and I would not have been revived. I didn't feel lucky at that point. It was during that time I was advised I had been placed under a legal hold and was being transferred to the psychiatric ward. Otherwise known as the Baker Act in Florida, I had been judged to be a danger to myself and legally bound to have a mental health assessment while being committed for a minimum of 72 hours. If I tried to leave I would be arrested. I was no longer in control. My worst fears were now upon me. Everyone knew.

I spent three weeks after that in a detoxification center. I then voluntarily agreed to attend a treatment program. I spent the first three months or so as an inpatient eventually transitioning to outpatient treatment. I sat at tables with doctors, lawyers, teachers, homeless men and women, war veterans, construction workers, pregnant mothers, my neighbor down the street, grandmothers and college students–you name it we were all there. After six months I was discharged back to the real world. I was a different person then and still am today. I stop and smell the roses. I watch the sunsets. I can handle the good and the bad without using. I didn't lose my license or my job or my professional career. In fact I gained so much more. I gained a life worth living.

One-thousand, nine-hundred and forty-four days ago I stood in front of that mirror. Every day I remember it like it was yesterday. Today, I look in the mirror, and I am grateful for the opportunities I have had to learn who I really am. Recovery helped me see that the real me is so much better than I ever gave her credit for. I no longer need substances to function. I now appreciate my faults. I no longer feel the need to be perfect. I am grateful my secrets are gone. The monster remains inside but is much quieter now. I know it will always be there waiting for its chance to finish what it started. It's up to me and only me to make the right choices to keep it quiet. I will always be an alcoholic and an addict. Tomorrow, if I remain vigilant, I can say one-thousand, nine-hundred and forty-five.

E. Sparks is a recovering alcoholic and addict. She is a wife, mother, and dog lover. She has a medical degree and recently retired from medical practice to focus on her passion for working with abandoned and abused dogs. She is an aspiring writer and hopes by sharing her knowledge and experience that she may help others who struggle with addiction. " E. Sparks" is a pseudonym.