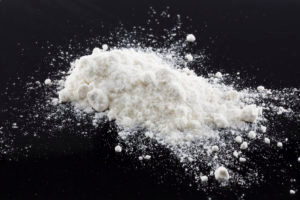 When a person uses cocaine, they excrete traces of the chemicals benzoylecgonine and methylegonine as they metabolize the drug. Both of these chemicals show up in saliva tests and in other bodily fluid tests and, if present, indicate that a person has used cocaine because excreting these metabolites is impossible for someone who hasn't used. However, previous tests that use fingerprint analysis and employ similar methods could only determine whether the person had touched cocaine, they're unable to determine if the person had actually taken the drug internally. In this study the researchers were able to use an additional technique known as Desorption Electrospray Ionization to determine if these two particular chemicals that are metabolites of cocaine, benzoylecgonine and methylegonine were present in the fingerprint residue of individuals. If these chemicals are present, it would be certain that the person providing the fingerprint has used cocaine because they can only be present when the body metabolizes cocaine. The findings indicated that for people who had used cocaine these two chemicals are present in their fingerprint residue.

This type of test has some pretty interesting implications. For example, drug testing is used mainly by the courts, probation departments, prisons, law-enforcement, etc. Traditional drug testing methods that use a person's urine, saliva or other bodily fluids are often limited by the need for special training, specific storage and disposal methods, off-site analysis of samples, can be vulnerable to tampering, and can be potentially hazardous to individuals doing the testing. This particular technique circumvents all of these issues. In addition, fingerprint analysis is much more difficult, if impossible, to fake.

At the current time this technology is not available for practical use; however, the researchers believe that in the future law-enforcement agencies and other interested in agencies could have a number of portable fingerprint drug tests available to them. These fingerprint analysis techniques would be able to specifically determine if an individual had used cocaine and also are infallible in their ability to identify that the sample comes from that particular person because everyone has a unique fingerprint.