People Who Drink Heavily May Have Lower I.Q.

People Who Drink Heavily May Have Lower I.Q. 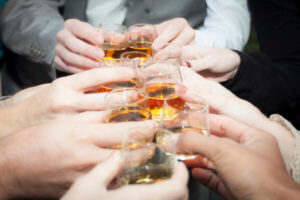 There has been quite a bit of research that has attempted to link people's drinking habits with their intelligence. For the most part, the research has been inconclusive such that there is no clear, consistent, relationship found between a level of the person's intelligence and their drinking habits. Research performed in Sweden looked at the drinking habits of over 49,000 men who had been in the Swedish military from 1969 to 1971. These subjects at all had brief IQ tests and had provided information on their alcohol usage, tobacco usage, psychiatric symptoms, their upbringing, and any medical conditions [1]. The researchers were interested in finding if there was an association between intelligence and total alcohol intake in adolescence, intelligence and patterns of drinking in adolescents, and if so does this association persist into adulthood.

The overall findings indicated that lower scores on the IQ tests were associated with a higher consumption of alcohol and risky drinking behaviors such as binge drinking. Moreover, lower social economic status, history of emotional problems, and issues with upbringing were also associated with more risky alcohol consumption. This story was picked up by many of the major news providers. Cruising many of the Internet science reporting sites one can see headlines based on the study that appeared to indicate that heavy drinkers are less intelligent than light or nondrinkers, that drinking alcohol makes you less intelligent, etc. One must remember that these headlines are designed to draw traffic to the sites and are not designed to be objective, accurate, and realistic. The type of research applied in this study is useful in understanding general principles as well as trends/associations in data sets, but it also has a number of inherent problems that limit the types of generalizations that can be made. A few of these issues are discussed next.

First, this study is a type of study that is known as correlational research, which is the most common form of research done in social sciences. Correlational research basically looks at how things are associated with one another. This type of research is unable to make any type of cause and effect inference based on the associations found in the research (the old "correlation does not equal causation" saying that you've heard many times in school). In fact, it would be unethical and impossible to perform a true experiment on people that could determine if drinking alcohol causes them to score more poorly on IQ tests (see [2] and [3] for a discussion on this). So any research study performed on people that looks at intelligence and alcohol usage cannot make the claim that drinking alcohol makes a person less intelligent. In the case of specific deficits associated with long-term chronic alcohol usage there are some studies indicate that chronic heavy alcohol usage over a period of years is associated with specific cognitive deficits; however, in normal populations studies such as this one the researchers are able to make a "drinking more alcohol causes you to be less intelligent" claim.

Second, the types of intelligence tests used in this study are not the standardized intelligence tests that would be used in a clinical study or to provide a clinically useful IQ score. Moreover, the method of data reporting and the measures of drinking behaviors use of this study are not reliable and valid and would be problematic if used in a more controlled study.

Third, there is a complex relationship between social economic status, health-related behaviors, and how groups of individuals perform on various cognitive tests. The researchers themselves note that there are a number of different explanations that could explain their findings including heavier drinkers having more emotional and social issues, heavier drinkers often belong to more socially/economically disadvantaged groups, and people who score low on IQ test are just less health-conscious than people who tend to score higher on IQ-type tests.

The researchers state quite unequivocally that for most of us our level of intelligence is actually fairly well established before they begin to drink and that it is a person's level of intelligence that probably moderates their health-related habits including such things as drinking and smoking. As stated above it is well-established that people who score higher on IQ tests or intelligence tests are as a group more health-conscious than people that score lower on these tests. So, despite the claims of many of the news services that covered this particular study, the study did not produce evidence that drinking "causes" people to be less intelligent, but instead reaffirms older notions that social background, emotional distress, and intelligence interact with people's behavior such as their alcohol usage.

One last thing to keep in mind about correlational research and research studies in general is that correlational research describes general associations and general trends among groups of people. These trends and relationships are never reported to be prefect relationships in the data. One can find obvious exemptions to the associations described in these types of studies, even in the data from which the research findings are drawn. So, even though this study found a general association between a lower score on an IQ test and higher alcohol consumption or more risky drinking habits, there were also small numbers of subjects in this study that demonstrated the opposite type of association (higher IQ scores and heavy drinking habits) as well as subjects in the study who demonstrated no such association. The overall finding and results are based on the overall trend in the data. We can all search our own experience and find exceptions to the findings; however, if we consider large groups of people instead of single cases these types of trends will be more evident.