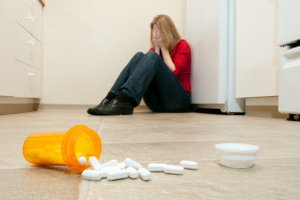 We all make mistakes and miss the mark at times. If we allow a single lapse to cause us to move backwards, relapse begins and can take over our lives. If we learn something from the lapse and it helps us to grow, we can instead experience a prolapse.

Most of us are familiar with the concept of a relapse from what we know about addictions. Someone who is addicted to a drug stops using the drug and then at some point starts using again. Often the person is more enslaved to the drug than they were before. This cycle is common in drug addiction, but it can also apply to any habit we attempt to change. The disorganized person fails to put away a day's worth of mail and suddenly finds a month's worth of mail scattered across the dining room table. The successful dieter eats cake at a birthday party and suddenly finds cake has become a daily indulgence. What if every lapse did not turn into a relapse? What if a lapse became an opportunity to grow and become stronger? This is the idea behind a prolapse.

A lapse turns into a prolapse when one is able to identify the triggers contributing to the lapse, increase outside support and create a viable plan for moving forward. The first of these three steps—identifying the triggers to the lapse—is a key step that's often overlooked but all three steps are an important part of the process.

Triggers can include events or circumstances, emotional or hormonal changes, anniversaries and the like. Triggers vary significantly from person to person and monitoring how someone else is triggered may help increase understanding of the concept—but it will not necessarily help one gain personal insight. Consider, for example, three former gamblers. The first ex-gambler played the lottery for the excitement. She is triggered when the jackpot gets over $100 million dollars. The second ex-gambler enjoyed going to the casino with friends. He is triggered when feeling lonely. The final former gambler enjoyed a wide range of gambling and gravitates to whatever is closest if she is short on cash. For her, being low on funds is a trigger. Each gambler had a different set of triggers for the same behavior. In each case, identifying the trigger for the unwanted behavior starts with understanding why the unwanted behavior started in the first place.

Once we understand why unwanted behaviors surface, we can then start looking for patterns. A smoker may notice that they lapse and have a cigarette right after work. Ending the work day is therefore a trigger. A former gossiper may notice they lapse when a certain person is in the office. That person's presence then is a trigger. Finding patterns may mean taking a look back to when the habit was commonplace even though that may be a painful process.

Support can come from many different directions. Involving friends and family in the process is a great first step. This could include asking them to be mindful of what they bring into your presence, asking them to hold you accountable or helping you get to other resources. Many times the people who are closest to you know you best and also how to help. Other times friends and family are too emotionally involved to provide true support or have needs of their own to take care of. You may have to look elsewhere.

Outside support could alternatively include professional assistance. For serious or dangerous lapses, that could mean the assistance of a mental health or substance abuse professional. For other situations that could mean hiring a life coach or accountability coach. A dieter with frequent lapses may want to turn to a weight loss program with an accountability component such as Weight Watchers. Asking for professional help is not a sign of weakness. Rather, it demonstrates true courage.

Outside support may also come from setting up systems to slow or delay the negative behavior. For example, someone who struggles with overspending on their credit cards could freeze their cards in a block of ice, call the card company and request the card be placed on hold for a period of time, or cancel their cards altogether. It can be very valuable to take some time to consider what creative intervention sparked by a person, computer or circumstance may slow down impulsive behaviors.

Understanding triggers and finding support may help one feel good, but without a plan for moving forward, the first two steps will likely be ineffective. In the addictions field this plan is formally referred to as a relapse prevention plan. It should just as easily be called a prolapse plan. Such plans can be applied to any behavior we are trying to overcome – not just addictions.

A great plan begins with an acknowledgement of triggers and a list of how to reach identified supporters. The next major part of the plan is what can be done when the triggers have risen. This is a detailed list of realistic actions that can be taken during times of temptation. For the overeater it could mean drinking a bottle of water. The disorganized may plan for 10 minutes of uninterrupted cleaning. The lonely ex-gambler may call a sponsor or have coffee with a friend. These small steps are what make the prolapse come to life.

If Another Lapse Occurs

Lapses happen. When they do, start the prolapse process immediately. Identify the triggers. Write them down. If you are not able to identify a trigger, talk with a supporter for suggestions. Revisit your list of outside supporters. How can your support system be modified to be more effective? Finally, revisit your plan while keeping what you have learned in mind. Tweak the plan as needed and move forward.