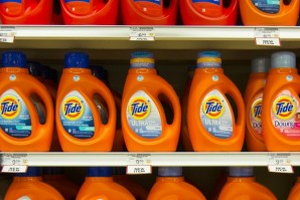 Call it customer loyalty or call it "liquid gold," the new street name for Tide liquid detergent. Thieves in New York and some other areas along the East Coast have one specific brand in mind when they shoplift from supermarkets, bodegas and discount stores (such as Target, Walmart, Costco, etc.).

Considered a number-one target for theft, Tide detergent remains at the top of a list of consumer products that have gained strong survival during the economic downturn of the last 8 years. Along with two other producers, Kraft and Coca Cola, Tide is a brand that few people will leave to use discount products.

Because of this popularity with consumers, it has become a hugely desired item in East Coast black market streets. Lower incidence is seen on the West Coast, although reports were made of a high-speed chase following a detergent robbery in California.

Recognizing the high level of theft that this product receives, police began to investigate what was happening with Tide and found that it was the number one item being stolen from retailers. One city in Bowie, Maryland reported losses of $10,000.00 to $15,000.00 per month in this one product alone.

Thieves are selling Tide on the streets for less than the nearly $20.00 per bottle it draws in the marketplace and most of the money made from the sales is going for drugs. In fact, thieves who were willing to talk about their use of the detergent reported that a single bottle could be exchanged for $5.00 in cash or $10.00 in weed or crack cocaine.

The idea of customer loyalty to the point where families will buy black market Tide is a serious indicator of hard times. Approximately 30 percent of the money going toward laundry detergent is spent on this product, which remains at the top of the list of products that have the strongest name identification; and consumers insist on using only this brand.

The exchange of detergent for drugs is an interesting market trade. While there were no comments available from the manufacturers, this can hardly be a source of good advertising for them. It appears that clean clothes are precious enough to exchange for drugs in today's economy.