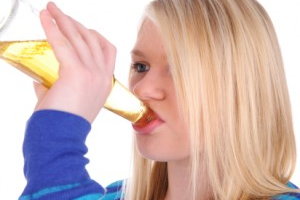 In a report released on November 20, 2012, a federally funded agency for the treatment and reduction of substance abuse, SAMHSA (Substance Abuse and Mental Health Services Administration) reported that certain regions of the country have seen an increase in sales and use of alcohol by underage youth.

While some areas are high in one area, but low in another; such as the southern portion of the country, where sales to minors (under 21 years of age) are high in certain states; Alabama, Louisiana, Kentucky, Mississippi, and North Carolina. Also reported were the recorded low statistics for the same region in alcohol consumption by minors; Alabama, Arkansas, Georgia, North Carolina, South Carolina, Tennessee and West Virginia. There were some areas where both underage drinking and purchasing of alcohol by underage consumers were both high; chiefly in the New England state of Vermont, with 37.0 percent, the highest in the country. Also ranked in the top ten nationwide were Connecticut, Massachusetts, New Hampshire, New York, and Rhode Island. Among those rated high in the underage purchase for consumption of alcohol was New York, with 15.0 percent.

Those states showing the lowest numbers for underage drinkers buying their own alcohol included Idaho, with 2.6 percent, Oregon with 2.6 percent and New Mexico at 2.5 percent.

During their information gathering years between 2008 and 2010, several significant trends were noted in the data collected. While SAMHSA's efforts at reducing the occurrence of underage drinking were partially successful, especially in the ages 17 and younger, the overall instance of alcohol consumption by those still under 21 was too high. A total number of 26.6 percent of all 12- to 20-year-olds participating in their study reported they drank in the month prior to being surveyed. A total of 8.7 percent of these drinkers bought the alcohol themselves during their last drinking episode.

"Underage drinking should not be a normal part of growing up. It's a serious and persistent public health problem that puts our young people and our communities in danger," said SAMHSA Administrator Pamela S. Hyde. "Even though drinking is often glamorized, the truth is that underage drinking can lead to poor academic performance, sexual assault, injury, and even death."

SAMHSA began the campaign nationwide to raise awareness of underage drinking and its devastating effects in 2006. They began to hold biannual town hall meetings for education of communities across the country. In the wake of this program, communities actively participated in developing programs to target this problem.

A program titled Sober Truth on Preventing Underage Drinking (STOP) provides funding via grants to decrease and help stop alcohol use in the young aged 12 to 20. These grants shore up collaborative efforts amongst community agencies to implement strategies for underage consumption reduction.

Another program offered through SAMHSA is called Strategic Prevention Framework -- Partnerships for Success. This program is designed to spread information at the level of federal, state and community to increase awareness of the necessity for halting underage drinking in ages 12-20 and drug consumption by youths, aged 12-25.

Treatment professionals, as well as community agencies, are encouraged to provide ideas for implementing and developing new programs nationwide to address these needs for all of America's young. Some of the collaborative efforts have been paying off, but it is still a problem that needs our full attention.