Why Exercise Is Good for Your Brain

Why Exercise Is Good for Your Brain 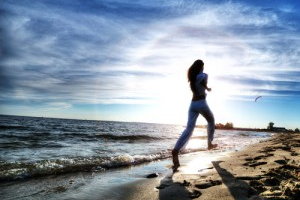 We all know the benefits exercise has on the body: increased strength and stamina, improved flexibility, better physical endurance, and possible weight loss. What many don't know is that exercise also has positive effects on brain chemistry as well. Exercise affects the brain in two ways: It triggers the release of certain neurotransmitters and it helps your brain create more neurons.

Neurotransmitters are chemicals that the brain uses to communicate with the body. There are literally hundreds of different chemicals that the brain uses to influence everything from your response to pain stimulus, to the warm, fuzzy feeling you get when you watch a kitten playing. These chemicals are also sensitive to drugs and medications, and some drugs can actually prevent you from producing them. Exercise can stimulate your brain to make these chemicals again.

Endorphin is the primary chemical your brain makes during exercise. This chemical acts as a pain reliever and creates a feeling of well-being. When athletes speak of a "runner's high," they are referring to endorphin. Aerobic exercises, like running, tend to trigger the release of endorphin more than other types of exercise; but you can still get a milder endorphin rush from activities like weight lifting and yoga.

Dopamine and serotonin are chemicals that stimulate the pleasure center of the brain and generate a feeling of well-being. Serotonin also helps regulate your sleep cycles, and appetite.

Dopamine and serotonin don't generate the "runner's high" that you get from endorphin; they are more subtle. For example, you might notice that you feel calmer after a good run (dopamine), or that you crave fewer carbs and sleep better on the days you go swimming (serotonin). As with endorphin, aerobic exercise is the biggest trigger, but other forms of exercise can stimulate the release of smaller amounts.

Neurons are the nerve cells responsible for sending messages to and from the brain. In a healthy individual, new neurons generate to replace the old. Factors like illness and drug use can kill healthy neurons, and reduce your ability to make new ones. This is why some drug use can have lasting cognitive effects, even after you have stopped using, and are in recovery.

Exercise increases neuron production in the learning and memory center of the brain and, when combined with other therapies, can actually reverse the effects of the drug use.

Neuron growth is only triggered by aerobic exercise so, to boost your cognitive power, try walking, running, or swimming. Dancing, cycling, and skiing also count as aerobic exercise.

Replacing neurons and neurotransmitters is not an overnight process. The time it takes to return to normal depends on the drugs you used, and the severity and length of your drug use. This is one of the reasons why some drugs have such a high rate of relapse.

Incorporating exercise into your treatment plan, medications that can replace some of the lost brain chemicals, and a healthy diet can increase your chances of success. And when you are physically fit, your body feels better and you will feel mentally happier.

Although being physical is an excellent way to feel better while maintaining sobriety, there is also a chance of taking it to the extreme and trading one addiction for another, even if it is a healthy activity. If you notice that you are spending increasingly more time exercising, that your thoughts are consumed with your next workout or counting calories, or that you are exercising through pain and injuries, you could have an exercise addiction. Always consult with your physician before starting an exercise program, and keep your sponsor or addiction counselor in the loop.