You Are Who Your Friends Are: The Importance of Peer Influence

You Are Who Your Friends Are: The Importance of Peer Influence 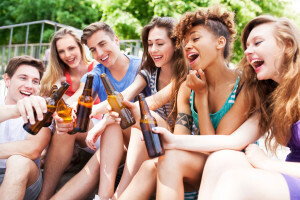 An example of social facilitation occurs among athletes who perform better in a group when competing against others than they do alone against the clock. An example of social loafing that most people can relate to occurs when certain members who work in a group project at school where the evaluation is based on the overall group performance do not put in very much effort into the final project and coast on the efforts of others.

Groups affect the behavior of individuals in many other ways. For instance, many of us unconsciously attempt to conform to the norms or values of the types of groups that we identify with such that the clothes that we wear, many of the sayings that we use and even our attitudes are often shaped to conform to the behavior of the groups that we identify with. Conformity can be thought of another aspect of social facilitation.

A great deal of alcohol use and other substance use occurs in a social context, especially for younger people. One of the strongest predictors of substance use is peer substance use, especially among younger individuals. There has been a good deal of experimental studies in artificial conditions or survey research that have indicated that the mere presence of other people drinking alcohol affects the amount and the rate at which individuals consume alcohol [2]. A recent study attempted to test the notion in real world conditions that young people increase their drinking behavior if the group they were is drinking and in increases in size [3].

What Does This Mean?

In essence, the study applies theoretical constructs developed in laboratory conditions to the real world. It indicates that if you are out with a group of friends who are drinking alcohol or using some other substance the chances are that you will increase your usage without really thinking about it. As more people in your group drink, you are more likely to drink more. This is not an absolute; it certainly does not suggest that you absolutely will drink more in this situation or that anyone will increase their drinking in such a situation, but that it is more likely that a person in a group of people who are drinking alcohol (or using some other substance) will increase their usage without really paying attention to their behavior.

There are also implied aspects to this study that can be helpful for those in recovery. If someone is attempting to control their drinking behavior or substance usage, the study suggests that continuing to go out with groups of friends who continue to engage in these behaviors would increase the risk that the person will not reach their goals. Again, it is important to understand that there is no guarantee that going out with groups of friends who are using will absolutely result in the person using; however, doing so is a risky situation for individuals trying to moderate or abstain from using alcohol or drugs. Likewise, we would expect the opposite condition to hold some relevance even though not formally tested: if we are in a large group who are not drinking or using drugs, we would drink less or not at all. Thus, the 12-Step notion of avoiding people, places and things or situations associated with past abuse does get some support from this research. Going out with a mixed bag of folks--drinkers and nondrinkers--would actually increase your chances of not drinking.

Finally, knowledge is power. If you know that going out in a group of people that are going to drink is a risky situation but for some reason you still have to go you can designate a person to watch over you and to remind you either not the drink or if you are limiting your drinking count your drinks for you and remind you of when you need to stop. That one loyal friend in the group who understands you and has your best interests at heart can go a long way in helping you. Announcing to the group that you do not wish to drink and asking for their assistance can sometimes help, although not always, especially as certain members get more intoxicated. The bottom line here is to stay focused on your behavior and not on the behavior of others.

Some people will look at this type of research and conclude that it is a "no brainer" or that it is simply common sense that these findings would hold true, which is actually called a hindsight bias; However, it is important to remember that any notion, any idea, or any theory has significantly more validity and is better understood when it is confirmed empirically.

It is also common sense that "haste makes waste" and that "a stitch in time saves nine." But how can both be true? They both are usually claimed to be true only after the facts or results are known and not beforehand. Under what conditions do these common sense sayings, which are total opposites, apply? How can you use them to predict your own behavior in an upcoming situation so that you act accordingly in all situations? You would have to research them and understand their dynamics in order to find out when they are relevant and when they are not. Likewise, we should use research findings in addition to help us guide our recovery.