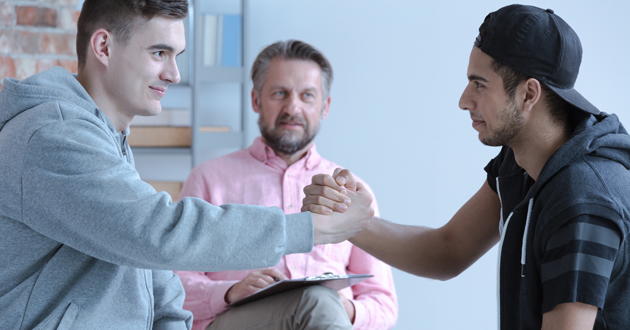 Although addiction is a problem for both men and women, the way they experience it, as well as how they deal with it, can differ vastly. According to the U.S. Department of Health and Human Services, men are more likely to use a variety of illicit drugs compared to women, and they often start doing so early in life. In addition to using drugs, men are also more susceptible to developing addiction and treatment compared to women.

And the differences don’t end there:

The physical effects of drugs can also be felt differently between genders. Women tend to have less water content than men do, meaning drugs ingested by women will linger in their systems for longer periods. Studies have shown drugs stimulate brain activity among men and women differently—for women, hormones, physicality, even the menstrual cycle can change the effect of a drug. The motivation to use drugs is also divided along these gender lines. For men, drug use stems from conforming to gender stereotypes that allude to risk-taking. They also tend to abuse drugs in an effort to boost their performance at work, enhance their sex lives, or to just have a good time. Women, on the other hand, tend to use drugs as an emotional escape, or for social reasons.

Although there is little to no evidence that definitively links substance abuse to domestic violence, studies have found that a large number of people who abuse their partners also engage in substance abuse.

On the other hand, sexual abuse and drug abuse do have a cause and effect relationship. Studies have shown a strong correlation between sexual abuse and addictive behaviors. Although it is more prevalent in women, one in 33 American men have experienced sexual abuse in their life. Men and women with a history of sexual abuse were found to be twice as likely to develop drug addiction compared to those not sexually abused. Additionally, victims of sexual abuse are more likely to suffer from depression and post-traumatic stress disorder. Many victims turn to drugs to cope with the trauma of abuse as well as the feelings of isolation and loneliness that come after having suffered abuse.

At a men-only rehab centers, patients are given treatment that is catered specifically with the male experience of addiction in mind; taking into account the unique challenges and social pressure faced by men, rather than a one-size-fits-all approach. An all-male setting not only eliminates romantic distraction with the opposite sex, but it also allows men to share their experiences and participate in their recovery without being judged based on traditional male stereotypes.

For those who choose to seek treatment at a men-only rehab center, there are many options out there and patients can choose the kind of care that best suits their individual needs. Different patients need different approaches to rehab.

Some patients may find that they need round the clock care and support in a controlled environment in order to overcome their addiction, in which case an inpatient facility would be most useful. At an inpatient facility, also known as residential treatment, a patient is required to check-in for long-term or short-term treatment.

However, many patients have obligations, such as family or work, that preclude them from being able to commit to full-time treatment. These patients may find an outpatient treatment to be less restrictive as it usually only requires the patient to be at the treatment center for 10 to 12 hours a week.

Among the main types of treatment programs available for men are:

A faith-based rehab option that approaches addiction treatment with a focus on spirituality. This faith-based approach strives to help addicts overcome their addictions by building a stronger connection with God and a stronger spiritual foundation. Although this type of program may primarily serve a single religion; the patient does not have to be a member of that faith to participate in the program.
Male Faith-Based Rehab Centers From Our Directory

For people who are not spiritual or are not comfortable discussing religion, there are non-faith-based facilities available. Several factors can influence the success of an individual in rehabilitation. If a person is not comfortable in their surroundings, they may not be able to focus on therapy. In such cases, a secular center that focuses on scientific, evidence-based treatment may be a better option.

On the more expensive end of the spectrum, luxury rehab centers incorporate recreational activities, a beautiful location, and fine-dining along with rehabilitation. Depending on an individual's preference, they can choose a rehab that best suits their interests. By seeking treatment at a luxury rehab center, patients can benefit by meeting like-minded people also in recovery.

How to Look for a Men-Only Rehab Center

Before looking for a rehab center, patients should first figure out what level of care and what kind of facility is covered by their insurance, granted they have insurance. The next step should be figuring out exactly what kind of treatment center–secular or non-secular, inpatient or outpatient–would best suit their needs. It is also a good idea to tour each facility before committing to one.

These are a few things to consider and keep in mind when choosing a rehab facility:

Addiction is an ongoing illness that requires a lifelong commitment to overcome. If you are a male who is seeking help, there are several men-only rehab options available that will give you the best shot at recovery. You don’t have to go the journey alone. Call the helpline today.